Hokkaido is the second largest main island of Japan and the largest and northernmost prefecture. The Tsugaru Strait separates Hokkaido from Honshu. It was formerly known as Ezo, Yezo, Yeso, or Yesso. The two islands are connected by the undersea railway Seikan Tunnel. The largest city on Hokkaido is its capital, Sapporo, which is also its only ordinance-designated city. About 43 kilometers (26 mi) north of Hokkaido lies Sakhalin Island and to the east and northeast are the Kuril Islands, which are administered by Russia, although the four most southerly are claimed by Japan. 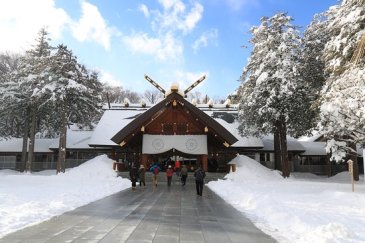 The Hokkaidō Shrine is a Shinto shrine located in Sapporo, Hokkaido, Japan. Sited in Maruyama Park, Chūō-ku, Sapporo, Hokkaido, the Hokkaido Shrine enshrines four kami including the soul of Emperor Meiji. A number of early explorers of Hokkaidō such as Mamiya Rinzō are also enshrined.

The area of the Hokkaido Shrine is 180,000 m², and is adjacent to Maruyama Park. During the season in which cherry blossoms in the area bloom, the shrine is crowded with people enjoying Hanami. Many people also visit the shrine during Japanese New Year to go Hatsumōde.

From June 14 to 16 in every year, the Main festival of Hokkaido Shrine, also called “Sapporo Festival” (Sapporo Matsuri), is held, and the line of people bearing Mikoshi parades down the street which leads to the shrine. It also manages Scouting activities. 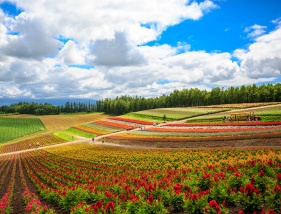 Shikisai no Oka is a flower garden on a hill carpeted with flowers from April to October. This feast for the eye features tulips, lupine, lavender, salvia, sunflowers, dahlia and Japanese anemone. 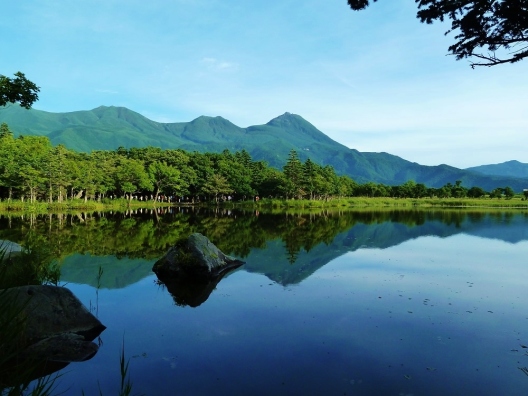 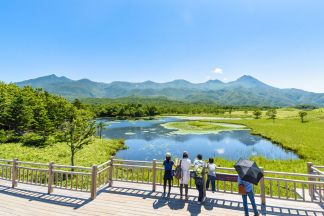 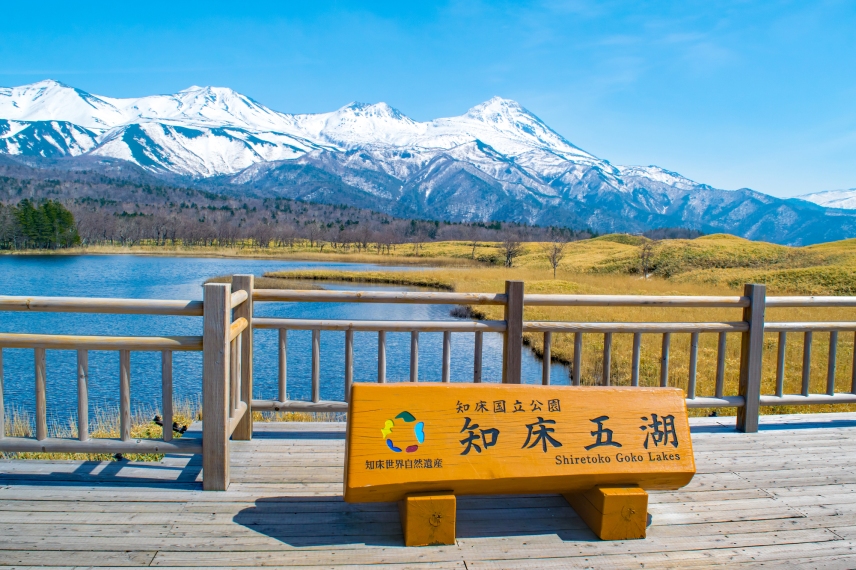 The Shiretoko Five Lakes (知床五湖, Shiretoko Goko) are a set of five small lakes formed long ago by the eruption of nearby Mount Io and fed by underground springs. Looking like the result of a god’s five fingerprints, the five lakes offer beautiful views of the surrounding mountains and wilderness and provide visitors an easy way to experience Shiretoko’s unspoiled nature.

An 800 meter long, wooden elevated boardwalk was recently built from the parking lot to the first lake, which allows visitors to enjoy views of the lake, the Sea of Okhotsk and the surrounding mountains without damaging the fragile ecosystem. The boardwalk is free to use, wheelchair accessible and open for the entire season (late April to late November). 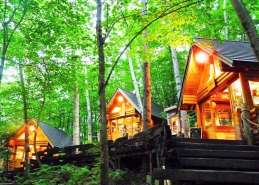 The Ningle Terrace in Furano is a favorite spot for drama producers. There is a shop selling merchandise from the various dramas produced in and around the Ningle Terrace – Yasashi Jikan and From the North Country just to name a couple. These cottage shops sell various handicraft products from customized leather goods to hand-crafted wooden figurines to paper artwork. The tall pine trees that surround these little cottages not only create beautiful scenery but also give the terrace a great scent. The Ningle Terrace is the best viewed at night when its numerous fairy lights glow against the dark. It is best accessed by car or taxi. 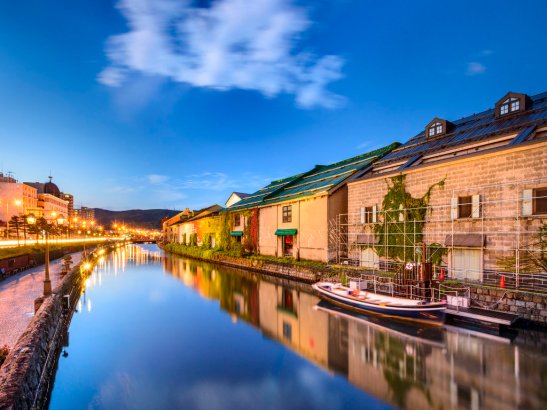 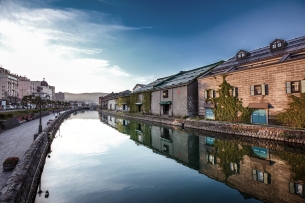 Otaru is a city and port in Shiribeshi Subprefecture, Hokkaido, Japan, northwest of Sapporo. The city faces the Ishikari Bay, and has long served as the main port of the bay. With its many historical buildings, Otaru is a popular tourist destination. Because it is a 25-minute drive from Sapporo, it has recently grown as a bedroom community.

The city was an Ainu habitation, and the name “Otaru” is recognized as being of Ainu origin, possibly meaning “River running through the sandy beach”. The very small remaining part of the Temiya Cave contains carvings from the Zoku-Jōmon period of Ainu history, around A.D. 400. Otaru was recognized as a village by the bakufu in 1865, and in 1880 the first railway line in Hokkaido was opened with daily service between Otaru and Sapporo. 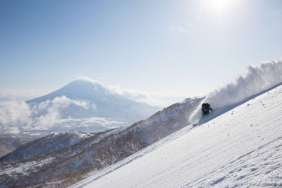 Mt. Niseko Annupuri at Hokkaido’s Niseko. The lovely natural scene that spreads out there is especially full of winter sports, and during that season, many tourists visit so that they can enjoy skiing and snowboarding. Among the numerous ski resorts on Annupuri, the Niseko Village Ski Resort has a lot of slopes with a high degree of difficulty so that the advanced skiers can enjoy them to their hearts’ content. Furthermore, besides skiing and snowboarding, a variety of other winter sports can be tried out. There are winter activities that can only be found at Niseko Village such as snowmobiling, cross-country snow rafting and reindeer sleighing. For the advanced skiers, there is also the First Tracks Cat Skiing where you can ski down fresh and untouched powder snow. Have an absolutely great time with winter sports on the superior powder snow and the thrilling slopes.

Nakajima Park is a city park in Chūō-ku, Sapporo, Hokkaido, Japan. The park has a lake, two streams, a museum, a concert hall, an observatory, a historic building housing a tea shop, and several lawns and forests. At the south end, there are two shrines.

The largest feature of the park is Shobu Pond, located near the center of the park.

The park contains the Sapporo Concert Hall, also known as “Kitara”. Opened in 1997, it is the largest concert hall in Hokkaido, and houses a large main hall, small chamber music hall, and rehearsal rooms. A restaurant, nursery room, and museum shop are also located in the building.

The park also contains some sports grounds (tennis courts). These are open between April and November every year. The park is also popular for boating in summer, on the Shobu Pond, and cross-country skiing in winter.

Goryōkaku is a star fort in the Japanese city of Hakodate on the island of Hokkaido. It was the main fortress of the short-lived Republic of Ezo.

Goryōkaku was designed in 1855 by Takeda Ayasaburō. His plan was based on the work of the French architect Vauban. It is shaped like a five-pointed star. This allowed for greater numbers of gun emplacements on its walls than a traditional Japanese fortress and reduced the number of blind spots where a cannon could not fire.

The fort was built by the Tokugawa shogunate to protect the Tsugaru Strait against a possible invasion by the Russian fleet.

Goryōkaku is famous as the site of the last battle of the Boshin War. The fighting lasted for a week (June 20–27, 1869). 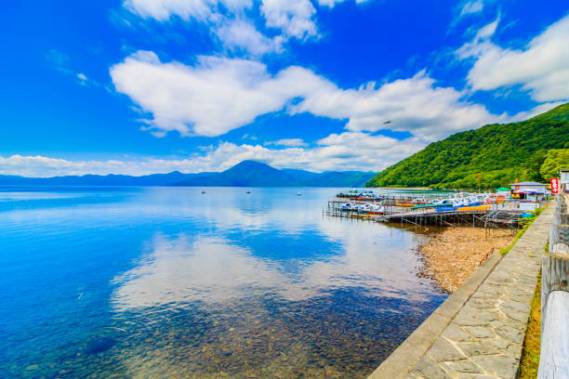 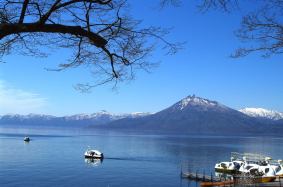 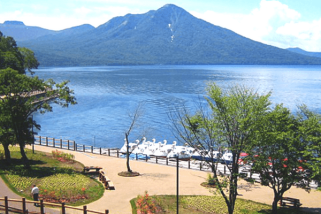 Lake Shikotsuis a caldera lake in Chitose, Hokkaidō, Japan. It is a part of the Shikotsu-Toya National Park.

Lake Shikotsu is located in the south-west part of Hokkaidō. It has an average depth of 265 meters (869 ft) and a maximum depth of 363 meters (1,191 ft), making it the second deepest lake in Japan, after Lake Tazawa. It is the 8th-largest lake by surface area in Japan and the second largest of Japan’s caldera lakes, surpassed only by Lake Kussharo. It is surrounded by three volcanos: Mount Eniwa to the north and Mount Fuppushi and Mount Tarumae to the south. The caldera formed in the holocene when the land between the volcanos subsided.

Due to its depth, the volume of Lake Shikotsu reaches 3/4 of the volume of Lake Biwa, Japan’s largest lake, despite having only 1/9 of that lake’s surface area. Due to the small surface area to depth ratio, the water temperature remains quite constant throughout the year, making it the northernmost ice-free lake in Japan. The Bifue, Okotanpe, Ninaru and Furenai rivers feed into it, and its main outlet is the Chitose River.

Ōnuma Quasi-National Park is a 90.83 km2 (35.07 sq mi) quasi-national park on the Oshima Peninsula in southwest Hokkaidō, Japan. The park encompasses the volcanic Hokkaidō Komagatake (北海道駒ケ岳 Hokkaidō Koma-ga-take) as well as the Ōnuma (大沼) and Konuma (小沼) ponds, which abut against the west slope of the mountain. The park, which was designated as quasi-national in 1958, is the smallest major park in Hokkaidō.

Ōnuma and Konuma were created when mudflows due to eruptions of Hokkaidō Koma-ga-take dammed up depressions at the base of the mountain. The ponds, which are dotted with water shields, are surrounded by birch and maple forests. 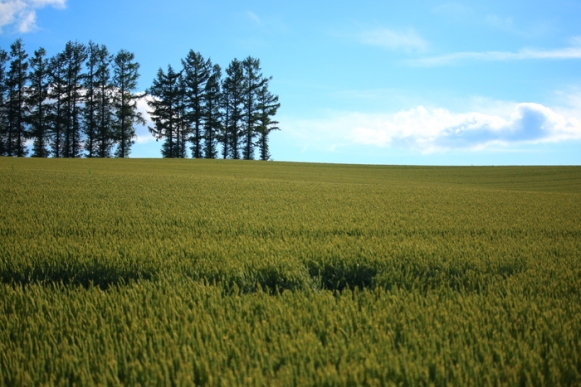 Biei is famous for its views of wide fields and hills and is used as a backdrop for many Japanese commercials and TV programs. The bright colors of its fields attract thousands of visitors in July and August.

The Rusutsu Resort is the largest resort in Hokkaidō, Japan, operated by Kamori Kankō. The resort is famous for its ski slopes but also offers year-round attractions including an amusement park and golf courses.

The ski resort extends over three mountains; West Mountain, East Mountain, and Mount Isola. The total number of courses is 37, with a total length of 42 kilometers (26 mi). Rusutsu Resort was the first Japanese ski resort to be awarded Best Small Resort by The Great Skiing & Snowboarding Guide, a British ski magazine. According to a 2003 survey by View Communications, Japanese NPO, skiers ranked the resort as the most satisfying among 48 ski resorts in Japan. 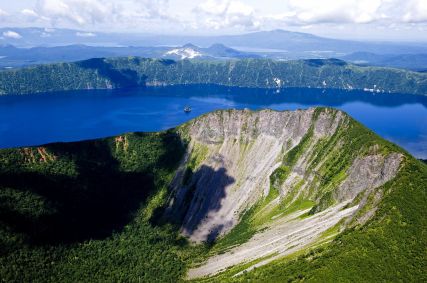 Lake Mashū is an endorheic crater lake formed in the caldera of a potentially active volcano. It is located in Akan National Park on the island of Hokkaidō, Japan. The lake has been called the clearest lake in the world.\

Lake Mashū is surrounded by steep crater walls 200 meters (660 ft) high. It has no significant inlets and no outlet. The lake is one of the clearest in the world and one of the deepest in Japan. On August 1, 1931 the transparency of the water was measured at 41.6 meters (136 ft). Around the same time, Lake Baikal was measured 40.5 meters (133 ft). This is the basis for the lake’s claim to be the clearest in the world. Since the 1950s the transparency has tended to range between 20 and 30 meters (66 and 98 ft). The loss in transparency is probably due to the introduction of sockeye salmon and rainbow trout into the lake and landslides. At the same time, the clarity of Lake Baikal has not been measured.

In summer, the surface of Lake Mashū is often obscured by fog. This has given the lake a reputation for mysteriousness. A local legend says that if you can see the surface of the lake, you will have bad luck. 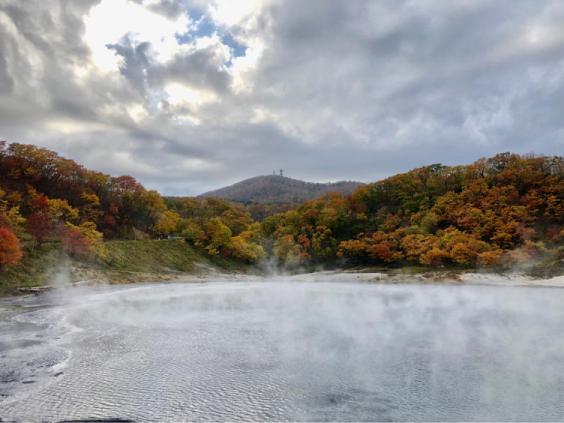 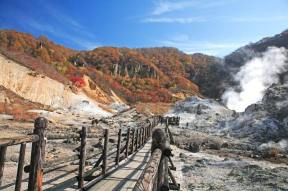 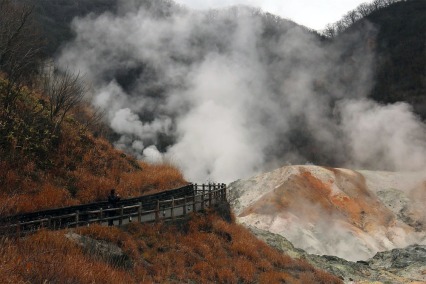 Jigokudani or Hell Valley is a part of Shikotsu-Toya National Park and serves as the main source of water of Noboribetsu’s hot springs. The valley is named such because the area is believed to be occupied by oni or Japanese demons. 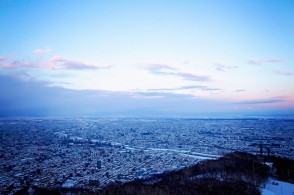 The Mt. Moiwa Ropeway is a Japanese aerial lift line in Sapporo, Hokkaidō. This is the only line Sapporo Development operates, while the company also operates a ski jumping course and an amusement park. Opened in 1958, the line climbs Mount Moiwa. The observatory is built for the panoramic view of the city. There also is a ski resort.