All Saints Day in the Philippines 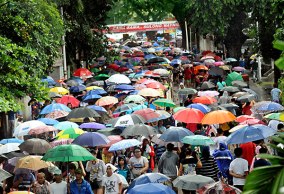 All Saints’ Day, also known as All Hallows’ Day, Hallowmas, the Feast of All Saints, or Solemnity of All Saints, is a Christian festival celebrated in honour of all the saints, known and unknown. In Western Christianity, it is celebrated on 1 November by the Roman Catholic Church, the Anglican Communion, the Methodist Church, the Church of the Nazarene, the Lutheran Church, the Reformed Church, and other Protestant churches.

Hallow-mas in the Philippines is variously called “Undás“, “Todos los Santos” (Spanish, “All Saints”), and sometimes “Araw ng mga Patay / Yumao” (Tagalog, “Day of the dead / those who have passed away”), which actually refers to the following day of All Souls’ Day but includes it. Filipinos traditionally observe this day by visiting the family dead to clean and repair their tombs. Offerings of prayers, flowers, candles, and even food, while Chinese Filipinos additionally burn incense and kim. Many also spend the day and ensuing night holding reunions at the cemetery, having feasts and merriment. 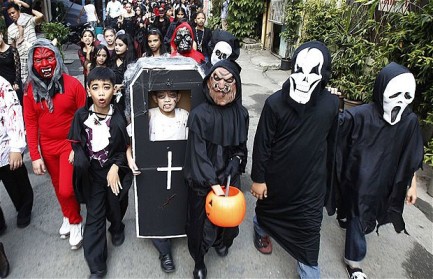 Though Halloween has usually been seen as American influence in the Philippines, the country’s trick-or-treat traditions during Undas (from the Spanish “Honras”, meaning honors, as in “with honors”) are actually much older. This tradition was derived from the pre-colonial tradition called pangangaluwa. Pangangaluluwa (from “kaluluwa” or spirit double) was a practice of early Filipinos who sang from house to house swathed in blankets pretending to be ghosts of ancestors. If the owner of the house failed to give biko or rice cakes to the “nangangaluluwa”, the “spirits” would play tricks (try to steal slippers or other objects left outside the house by members of the family or run off with the owner’s chickens). This pre-colonial practice is still seen in rural areas. During Undas, family members visit the cemetery where the body of the loved ones rests. It is believed that by going to the cemetery and offering food, candles, flowers, and sometimes incense sticks, the spirit of the loved one is remembered and appeased. Contrary to common belief, this visitation practice is not an imported tradition. Prior to the establishment of coffins, pre-colonial Filipinos were already practicing such a tradition of visiting burial caves throughout the archipelago as confirmed by a research conducted by the University of the Philippines. The tradition of “atang” or “hain” is also practiced, where food and other offerings are placed near the gravesite. If the family cannot go to the gravesite, a specific area in the house is provided for the offering. The exact date of Undas today, 1 November, is not a pre-colonial observance date but an influence from Mexico, where the same day is known as the Day of the Dead. Pre-colonial Filipinos preferred going to the burial caves of the departed occasionally as they believed that aswang (half-vampire half-werewolf beings) would take the corpse of the dead if the body was not properly guarded. The protection of the body of the loved one is called “paglalamay”. However, in some communities, this paglalamay tradition is non-existent and is replaced by other pre-colonial traditions unique to each community. The Undas is also seen as a family reunion, where family members coming from various regions go back to their hometown to visit the grave of loved ones. Family members are expected to remain beside the grave for the entire day and socialize with each other to mend bonds and enhance family relations. In some cases, family members going to certain burial sites exceed one hundred people. Fighting in any form is prohibited during Undas. Children have important roles during Undas. Children are allowed to play with melted candles in front of gravesites and turn the melted wax from the candles into round wax balls. The round balls of wax symbolize the affirmation that everything goes back to where it began, as the living will go back to ash, where everything started. In some cases, families also light candles at the front door of the home. The number of candles is equivalent to the number of departed loved ones. It is believed that this tradition aids departed loved ones and provide them with a happy path to the afterlife.