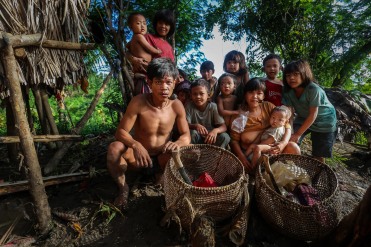 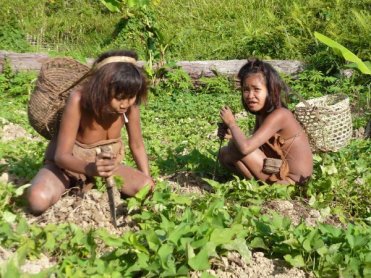 Mangyan is the generic name for the eight indigenous groups found on the island of Mindoro, southwest of the island of Luzon, the Philippines, each with its own tribal name, language, and customs. The total population maybe around 280,000, but official statistics are difficult to determine under the conditions of remote areas, reclusive tribal groups and some having little if any outside world contact.

The ethnic groups of the island, from north to south, are Iraya, Alangan, Tadyawan, Tawbuid (called Batangan by lowlanders on the west of the island), Buhid, and Hanunoo. An additional group on the south coast is labeled Ratagnon. They appear to intermarry with lowlanders. The group is known on the east of Mindoro as Bangon may be a subgroup of Tawbuid, as they speak the ‘western’ dialect of that language. They also have a kind of poetry which is called the Ambahan.

The Mangyans were once the only inhabitants of Mindoro. Being coastal dwellers at first, they have moved inland and into the mountains to avoid the influx and influence of foreign settlers such as the Tagalogs, the Spanish and their conquests and religious conversion, and raids by the Moro (they raided Spanish settlements for religious purposes, and to satisfy the demand for slave labor). Today, the Mangyans live secludedly in remote parts of Mindoro but eventually come down to the lowlands in order to make usual trades. Their sustenance is farming for their own crops, fruits, and hunting. A certain group of Mangyans living in Southern Mindoro calls themselves Hanunuo Mangyans, meaning “true”, “pure” or “genuine”, a term that they use to stress the fact that they are strict in the sense of ancestral preservation of tradition and practices.

Before the Spaniards arrived in Mindoro, the people traded with the Chinese extensively, with thousands of supporting archaeological shreds of evidence found in Puerto Galera and in written Chinese references. A division was created among the people of Mindoro when the Spaniards came. There were the Iraya Mangyans, who isolated themselves from the culture of the Spaniards, and the lowland Christians who submitted themselves to a new belief system. These two groups only interacted for economic matters through trading forest goods from the Mangyan and consumer goods for the lowlanders.

Despite being grouped as one tribe, Mangyans differ in many ways. In comparison to the technological advance between the two geographical divisions, the Southern tribes are more advanced as seen in their use of weaving, pottery, and system of writing. The Northern tribes, on the other hand, are simpler in their way of living. Their language, as in the rest of the Philippines, came from the Austronesian language family. However, even if they are defined as one ethnic group, the tribes used different languages. On average, they only share 40% of their vocabulary. The tribes have also varied physical and ethnogenetic appearances: Iraya has Veddoid features; Tadyawan is mainly Mongoloid, and the Hanunuo looks like a Proto-Malayan.

Another difference between tribes is the date of their arrival in the Philippines. A theory suggests that the Southern tribes were already present by 900 AD while the Northern tribes are believed to have arrived hundreds of years ahead of their Southern peers. The Spanish authorities had documented their existence since their arrival in the 16th century. However, historians suggest that the Mangyans may have been the first Filipinos to trade with the Chinese. Examples of this relationship are seen in the burial caves, as porcelains and other potteries abound. However, not much ethnographic research has been made except for the tribal and linguistic differences that may lead to the indication that the tribes can be treated separately.

Mangyans lived in peaceful societies as compared to the head-hunting tribes of North Luzon and the brave defiant warrior tribes of the South. Social scientists theorized that some societies become peaceful because their system of norms and values reward peaceful behavior but disapprove of aggressive and impulsive behaviors. Peaceful societies are characterized by the egalitarian social organization without status competition between men and without the asymmetric relationship between men and women. Another theory posited that populations adapt, therefore, offering a more logical explanation of why Mangyans preferred to retreat in the hinterlands. They accept peaceful submissiveness when they encounter lowland settlers, missionaries, traders and government officials.

Mangyan is mainly subsistence agriculturalists, planting a variety of sweet potato, upland (dry cultivation) rice, and taro. They also trap small animals and wild pigs. Many who live in close contact with lowland Filipinos sell cash crops such as bananas and ginger.

Their languages are mutually unintelligible, though they share some vocabulary and use Hanunó’o script to write: Tawbuid and Buhid are closely related, and are unusual among Philippine languages in having an /f/ phoneme; Tawbuid is divided into eastern and western dialects; Western Tawbuid may be the only Philippine language to have no glottal phonemes, having neither /h/ or /ʔ/.

Their traditional religious world view is primarily animistic; around 10% have embraced Christianity, both Roman Catholicism and Evangelical Protestantism (The New Testaments have been published in six of the Mangyan languages).

The Mangyan have a complex spiritual belief system which includes the following deities:

The indigenous Mangyans offer a myriad of culturally rich artifacts that give insight into their culture and trade. The people living in Southern Mindoro during the pre-Hispanic era are exceptional in their weaving, pottery, and system of writing. Their clothing differs between genders. The male generally wears loincloths as covering for the lower body whereas the female would wear a skirt and a shirt for the top. The terms and materials would differ from tribe to tribe, but the exceptional designs would come from the Hanunó’os. Their textiles are dyed in indigo blue and have an embroidery design called pakudos at the back and can also be found on their woven bags.

Their system of writing, called Surat Mangyan, is a pre-Hispanic syllabic system and is believed to be of Indic origin. It is still practiced today and is still being taught in different Mangyan schools of Oriental Mindoro. The Hanunó’os also practice their own traditional poetry called the Ambahan, a rhythmic poetic expression with a meter of seven syllables presented through recitation and chanting or inscribed on bamboo.